Choosing a right electric guitar is never easy, especially if you’re a beginner. There are many factors you need to put in the equation, in order to get the best possible result for your needs and make the important choice of getting the right first instrument, as this could be a crucial factor in determining if you’re going to continue pursuing your musical aspirations.

These are reasons why we decided to make the list of best beginner electric guitars right here and now, but before we delve further into that, let’s first reflect upon a few things that are essential for the preparation of that list.

Take Time To Learn The Basic Components Of An Electric Guitar

This may seem a bit trivial, but you’d be surprised at the fact that most of the fledgling guitarists don’t devote some time to actually learn more about the instrument they are planning on buying.

Learning the ins and outs of your preferred instrument will assist you in choosing the right model and make that will yield the best results, based on your personal needs and wishes.​

You should read this article to understand about electric guitars before making decision: Parts Of An Electric Guitar

Choosing the right tonewood can make a big difference on just how exactly will your guitar sound. Different materials will produce a different tone, and choosing the right one for your needs will usually make a significant impact. You can learn more about different kinds of tonewood here:

Action is the term that refers to the height of the strings from the fretboard. To put it short and simple – the lower they are, the easier it is to get the right sound.

Before you go shopping for your next axe, you should take the time to carefully plan and determine your budget. There are some truly great deals for cheap electric guitars for beginners, but you should be weary that cheap is not necessarily the best solution out there.

Best beginner electric guitars often come in bundles or packs, so you really shouldn’t restrain from searching for the best possible deal out there.

If you’re able to set that bar a bit higher, the search for best electric guitars for beginners could easily transform into a quest for a piece that will fulfill your needs as a serious guitar player – not just as a beginner.​

What Genre Of Music Are You Planning To Play?

This is a very important question you should ask yourself, as the type of music you’re planning on playing is going to play a big factor when determining the right guitar for you. A guitar for metal music is not going to do especially well when it comes to blues or funk tunes.

This can be further expanded by choosing from the different designs of guitars, as the look of the guitar is going to play a role in the choice you’re making, if not the most significant one.

Number and type of pickups are also a factor that should not be overlooked, as they are going to be a major influence on the sound of your guitar. Length and type of the fretboard are another one of the factors from the same category.​

Ever since its beginnings, Fender has made sure to have a piece for the guitar players that are just starting their musical journey. This piece looks just like the old Telecasters we learned to recognize and love, and only a small caption that states “Made in China” stands out as a reason for the difference in price.

This guitar has three pickups: a Tele single coil neck pickup, Strat middle pickup and a hum bucking bridge pickup, which is magnificently paired with a five-way switch and a coil splitting toggle for hum bucking pickup, making sure to deliver you a vast amount of different tones.

A c-shaped neck is made of maple wood, alongside a maple fretboard, which has a 9.5″ radius, coupled with 22 jumbo frets that make this electric guitar perfect for playing fast.

The standard Telecaster design features four different colors, including 3 tone sunburst, black transparent, honey burst and charcoal transparent that give you a range of possibilities, but at the same time preserves the vintage look and feel.

Other features of this guitar are a three-ply pick guard, nickel and chrome hardware and a tone and volume control knobs.

While this modern version of the standard Fender Telecaster is probably not going to be named the guitar of the year anywhere, it’s quite safe to say that it’s one of the best beginner electric guitars out there.​ 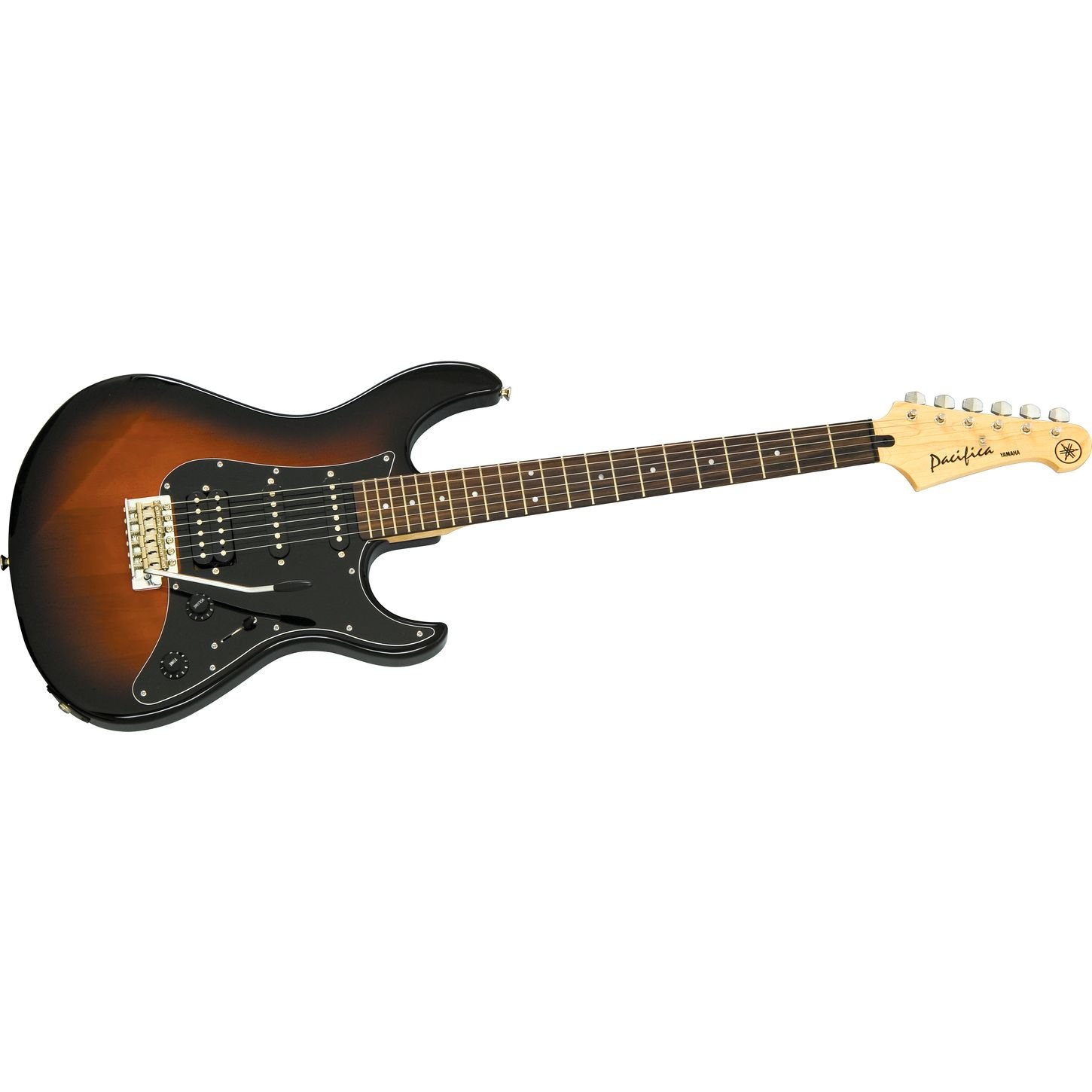 Making its first appearance in 1990, Yamaha Pacifica electric guitar has strived since then to deliver a great tone, outstanding playability, and astounding versatility. Various pickup settings make sure you’ll have a wide range of possible sounds to play in a number of music genres.

This piece sports an Agathis body, coupled with a maple neck with bolt on and a snorkeling fingerboard. While Agathis tonewood is generally frowned upon by the majority of guitar players, it has to be said that it really doesn’t affect the overall sound and tone of this electric guitar.

In addition to the abovementioned, this guitar has five-position switch and even a vintage-style tremolo, which further expands and builds on the versatility you can get from it. That being said, that tremolo is possibly the part that is mostly lacking quality, which largely depends on from model to model of the same series.

Another thing to look out for is the cable jack, which can be a little flimsy on some particular pieces.

The design of the guitar looks a lot like your standard Fender Stratocaster, and it comes in four different colors – black, metallic red, metallic blue and old violin sunburst, making sure you can take your pick from an axe that sports a real modern look, to the one that has a rather vintage feel to it. 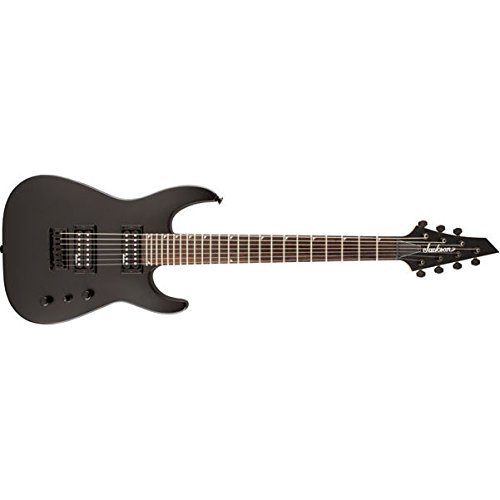 Now, this piece here could very easily be what a fledgling guitarist, but a true metalhead would want for his first electric guitar, especially if you’re planning on utilizing any drop tunings.

The main feature of this guitar is that it has seven strings, but it certainly isn’t the only one. The Dinky also has a string through body tailpiece, and it has a real metal look to it, which comes in two distinct colors – satin black and snowy white.

Since it does aim at users and audience who are leaned more towards metal sound and music, it’s no wonder this guitar is built for speed and a heavy punch, with its body made out of basswood, a maple neck and rosewood fingerboard with jumbo frets.

In case you needed more punch to this, you’ve got it – in the form of two sizzling hot hum buckers that are sure to provide you with a ton of sustain. Last but not least, there are two control knobs – one for volume, and the other one for tone.

If we add the fact that this electric guitar is really modestly priced, especially if you consider that it is a 7-string, it’s easy to see why it found its way to this list.

Epiphone has been well known for its guitar-making skills, since its beginning in 1873, and it has been making many instruments for a variety of musical styles since then. Now, in the modern day and age, Epiphone has successfully used the technological advancements to add some new and unique features, in order to deliver us only the top-notch quality electric guitars.

This piece is equipped with two Alnico V Humbucker pickups, and it has both tone and volume control for each. The rest of the hardware features the output jack, as well as LockTone Tune-o-matic Bridge, which is a nifty thing to have, especially if you jump around a lot when you play, just like I do.

Quite similar to the Yamaha Pacifica, and in virtually the same price range, this Fender does its best to imitate its standard Stratocaster version, and it does so very well. The difference between Yamaha Pacifica and this guitar is the versatility and build quality, which are quite similar, but my opinion is that Yamaha Pacifica actually just does it a little better.

Squier Affinity Stratocaster sports a solid body that is made out of Alder tonewood, a Maple neck, coupled with a Rosewood fingerboard, giving it that recognizable Fender sound and tone. It has three single coil pickups and a single-ply pick guard.

Other features of this piece include a 5-way selector switch for pickups, and two control knobs, for volume and for tone. The standard Fender design comes in a number of different colors, including butterscotch blonde, surf green, black, 2-color sunburst, Lake Placid blue, Olympic white, shell pink, Montego black metallic and burgundy mist.

It also comes equipped with a tremolo bar, which is perhaps one of the main downsides of this product. Similar to the abovementioned Pacifica, due to the somewhat cheap and flimsy design of the tremolo bar – if you’re not careful when you’re using it, there’s a fair chance that the guitar will get out of tune, which is something that you must avoid almost at all costs, especially during a gig.

There are many guitars that could rightfully be placed in the category of best beginner electric guitars, and it’s not easy to choose the best starter electric guitar, but the one guitar that really stands out, even from the shortlisted crowd above, has to be Fender Modern Player Tele® Plus Electric Guitar.

It has everything you’d need in a good guitar for a player just delving into the musical waters, but at the same time, it makes sure that it will not be traded anytime soon, as it can remain at your side as a piece that will serve as a double and a backup.

You are not sure if these electric guitars are suit for you or not? Just take a look at some acoustic guitar here.

Advertiser Disclosure: MusicalAdvisors.com is a participant in the Amazon.com Services LLC Associates Program, an affiliate advertising program designed to provide a means for sites to earn advertising fees by advertising and linking to Amazon.com, Amazon.co.uk, Amazon.ca. As an Amazon Associate we earn from qualifying purchases. Additionally, Revio.co.uk participates in various other affiliate programs, and we sometimes get a commission through purchases made through our links. Amazon and the Amazon logo are trademarks of Amazon.com, Inc., or its affiliates. We do not specifically market to children under 13.